In addition to its rich vegetation, the Marshes Nature Reserve of Piedras and Flecha del Rompido River known for its poultry diversity, because it is a crossing of many migratory species.

This invites the enjoyment of professional and amateur, you will find in this Special Protection Area (ZEPA) both common birds as some rarer. Today we will focus on the first, easy to identify for anyone:

With an impressive population 3100 copies, the gull bird is the star of the Natural Park. It is easily for their plumage, completely white except the back, intense gray. legs, peak and iris present a bright yellow. It is very similar to the yellow-legged gull, which abounds in ports and coastal towns. The Gull, Nevertheless, It is more reserved. It is an omnivorous and colonial species,  so it is common to find groups on the beach in search of food.

The little sandpiper, with 1500 copies, It is a favorite of children because of their particular way of running along the shore (hence its common name). It has beak and legs dark and adults are the easiest to identify in their breeding plumage (Of reproduction), since they have a very striking black chest patch. It feeds mainly on insects and larvae found on the surface or at shallow depth in the mud. Why live in grassy areas near lakes. Incubation of the eggs lasts about 21-22 days and it is performed by both sexes.

The name of this gull comes from its song, much like a guffaw. In the Natural Park there are 700 copies and is especially easy to identify by its chocolate-colored cap in breeding season or follow the plows nearby crops. It mainly feeds of animals, but eat almost any organic moiety. 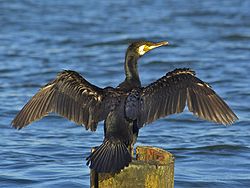 This species, present with a 700 copies, It is a large bird and black colored. Although initially immigration, currently half of the population is permanently given their dowries for fishing. Immerses three-quarters of his body when nothing and leaving remains in rocks or trees with wings spread to dry. It feeds on fish of different size, which can capture even diving, which often garners him the enmity of fishermen. This strictly migratory birds coming from Siberia in October and leave again in May. Paraje Natural arrive each year about 240 copies, feeding earthworm, crustaceans and molluscs caught the race on the surface. It has an average size and quite noisy in their singing. During the summer return to the breeding grounds in the Siberian tundra. Its plumage is mostly white heather gray, but acquires an intense black color in the chest and head during playback. 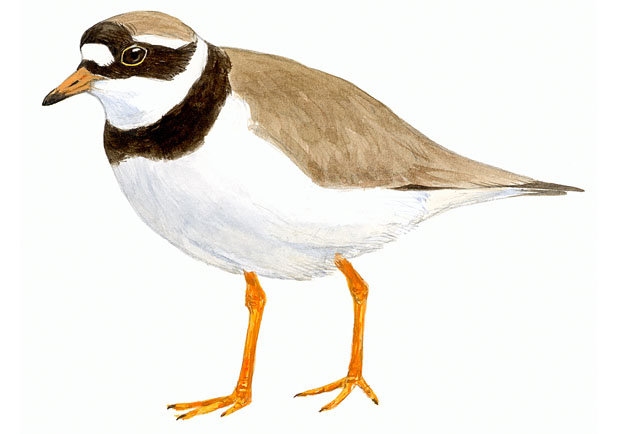 The ringed plover not played in our area, but every winter we visit a 280 copies. It is a wader bird of small size that feeds on worms, crustaceans and molluscs caught with a small peak after the mud race. During the summer flies north, as it is reproduced at high latitudes, from North America to Siberia.

Little Ringed Plover is quite similar to his older brother, the ringed plover, but the main difference is the size, evidently. Another curious difference is that, although this species reproduces itself in Spain, not pass here the full year, but spends the winter in West Africa. It eats insects (beetles, ants, flies, irons…) and larvae found on the surface. The number of copies you visit the Nature Reserve is similar, some 280.

The last guest of our list is the oystercatcher, that feeds on crustaceans and molluscs, whose shell breaks thanks to its powerful beak. His black in back and white chest, with her long red beak make it unmistakable. In the Natural Park inhabit a 105 copies, that overwinter here before returning north. The eggs, usually three, They are incubated by both sexes. Skipjack or fiddler crab typical El Rompido is a common prey Oystercatcher.